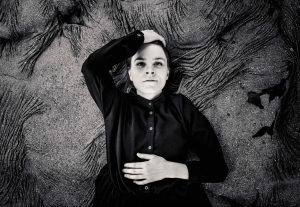 Named “Songwriter of the Year 2016”  by Danish Music Awards Folk, the singer-songwriter  Mirja Klippel  is a piece of Finnish nature that is starting to cut its name into the bark around Europe.

Klippel sings of love, war and longing; of blood ties and grandfathers fighting,  each for their  own  country.  Of forests, lakes and animals. She sings  of  nomad life and compassion  –   and of never completely belonging anywhere.  Her lyrics are a string  of  intense feelings that explode when her deep,  longing voice and Spanish guitar meet Alex Jønsson’s falsetto and freely phrasing electric guitar.

With music as a home and world as her backyard, Klippel has in the recent years toured in  e.g.  Germany, Greenland, Denmark, Finland, Sweden and Switzerland.   In  2014,  she  graduated  from  Sibelius Academy  in  Finland  and   The  Academy  of  Music  and  Drama  in Sweden, and in 2018 from Rhythmic Music Conservatory in Denmark. She plays a wide  array of  instruments  such as piano, guitar, waldzither and frame drum.